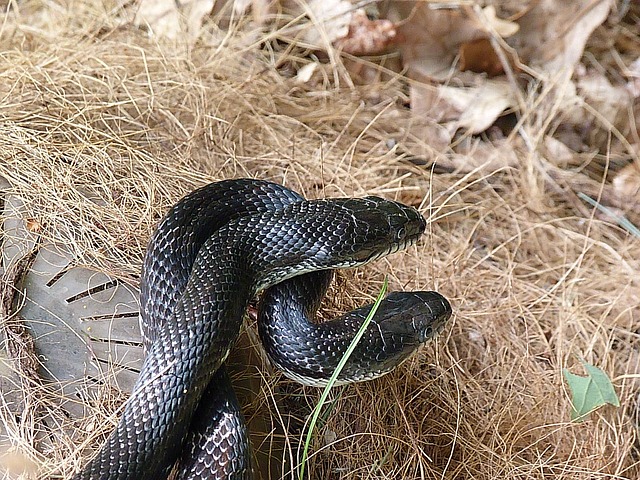 Black Rat Snake aka pantherophis obsoletus and a Baby Chipmunk

Black Rat Snake aka Pantherophis Obsoletus and a Baby Chipmunk

I saw a North Carolina Black Rat Snake today, sometimes known as Pantherophis obsoletus. Here in Asheville, NC. He was climbing out of a wooden retaining wall. I think he overwinters in the wall. The retaining wall is made of railway ties, and has several holes. It seem like perfect place for a black rat snake to hang out.

Anyway, Pantherophis obsoletus was slithering up an embankment towards my garden. The embankment has quite a pitch. I’d say 15 degrees or so. It’s hard for me to walk up  it but for the snake if only took a minute or two for him to traverse the 50 yards or so up the hill.

Black Rat snakes are quite common in North Carolina. Although they do not hibernate per se, they re able to slow down their metabolism in the winter. Once spring comes, however, it’s time to eat.

As to my black rat snake, he was moving up the hill towards a part of my garden that has a dense groundcover. Just in the last few weeks this area has greened up and thickened.

Within my ground cover, we’ve noticed several animal residents, some part time and some seem like they are living there. We have squirrels, chipmunks, rabbits and a couple of birds. The baby chipmunks have been a new addition. They are quite small but they do have  the telltale stripe down their back. I think they live mostly underground in holes created within the groundcover.

We have a birdfeeder directly in front up the groundcover. This attracts and feeds all of our animal residents. Unfortunately, the bird feeder also feeds the local black bears. So we leave the feeder out in the winter but by spring we have to remove it.

Right about now, about the only thing you can see near the bird feeder is the chipmunk poop. While its good as a natural fertilizer, it also tells me that I have a lot in the garden.

As you can see, we have quite a bit going on within this part of our garden.

As the snake entered the ground cover, there were enough gaps that I could continue to see him. I figured this was a good time to stop working for the day. So I went inside, grabbed a beer and decided to watch the nature show going on in my very own backyard.

The black snake started to slither along the top of the ground cover. I think word got around to the small mammals living in the ground. The rabbits and squirrels immediately left. The birds may a few weird noises and flew off to safety. Even the cute  moths and butterflies left. Something was definitely amiss in the ecosystem in my backyard.

Next, I heard a few weird squeeky noises. One chipmonk came running out of the ground cover. I know that there is a least one more chipmunk in that area and the baby chipmunks have yet to be seen. Hopefully, they are underground and safe.

About that time, I noticed that the black rat snake was coiling, ready to strike. Well I think that going to ruin someone’s day.

It only took an instant and the black snake had a baby chipmunk in it’s mouth. A moment later, the snake had begun to swallow. It didn’t take much effort because the baby chipmunk was quite small. I think we answer the question – what do snakes eat.

Moments later pantherophis obsoletus vanished into the ground cover and I lost sight of him. Will he continue to feed in that area? Will he munch a few more of the baby chipmunks. Only time will tell. For now, we have one less chipmunk and he’ll only be remember by the chipmunk poop he left behind.